The Festival has ended, the guests gone home, the venue has been cleaned up... but wait! There's more! THE FINAL REPORT. 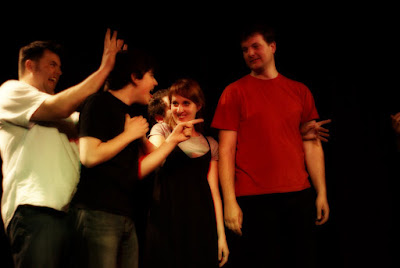 Alrighty! To recap, we have covered off the following topics in previous posts:
And now, probably the least exciting part... capturing and reporting on how the festival went and what could be done better / differently.

Now, you might think that if you haven't applied and received government funding, then why bother with a Final Report?? We'll just "improvise" the next festival after all so what's the big deal? If this is your thought, then you are supporting my original mantra of "Don't get an improviser to run an improv festival!"

Well, put the improviser aside for a bit and put on your Producer/Project Manager hat...

If you don't reflect on the festival you are running the risk of repeating previous mistakes/frustrations and getting yourself into trouble. Sure, you can meet up with some of the festival volunteers and talk about it... but if you don't at least write down the lessons learned, chances are that six or more months from the end of your festival, the details of those lessons learned will be lost.

Also, for the 2 to 10 hours you'll put into this, it could save you lots of frustration and embarrassment.

Ok, back to the topic of this post - The Final Report.

So, what goes into the report? For starters, it's a combination of what you planned versus what happened in reality. Your table of contents could (but doesn't have to) include:
Each section should capture the successes and challenges/areas for improvement.

If you received funding (cash and/or in-kind) from sponsors (whether they are private sector or public sector), they will want to see some kind of final report to validate why they helped you out in the first place (put yourself in the shoes of the person within the organization who supported you - they need to justify to their superiors that the money was well spent!).

Right, so, time for some examples... these are by no means the only way you can capture lessons learned, so feel free to come up with whatever works for you and your team.

Posted by ArgueGuy at 9:49 pm No comments: