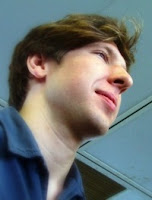 I was a self indulgent, inconsiderate, irresponsible teenager when I joined in 2001, and what improvements were made on those fronts over the six years I was with the Impromaniacs were, at least in part, because of improv. Although I suspected it at the time now with a little distance and perspective I know that the Impromaniacs is the best organization ever and that Jonathan is my hero. I find myself reminiscing at parties about my glory days as improvisor with the Impromaniacs. I love that we have the least hip name ever. I love that it's still happening and look forward to rejoining the fold if/when I ever return to Victoria. As far as specific memories: The work shop with Yuri from yellow man group where we did the yoga and the arm talking, learning about facing the void, all the sweet hippy improv workshops with Alistair and Dave, being a part of several fantastic shows down in Bellingham, and years worth of beautiful rehearsals.
It's pretty much embarassing how much I love the Impromaniacs.
Posted by ArgueGuy at 8:20 pm