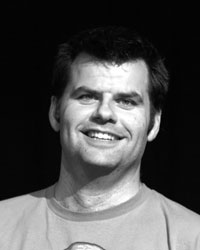 It's hard to believe that it's been almost 9 years since I joined the Impromaniacs, a truly life altering event. I think I was always drawn to performing but I was a self conscious youth and it wasn't until I was 30 that I decided that I needed to outlet my creative side and I didn't care what people thought... as much. I was working, as I am now in forestry and my friend, an work colleague at the time, Steve (Improv Alumni) suggested I come to auditions. I said I would think about it and quickly decided that, yes indeed, it was time to stop talking about doing something creative and dive in. Well, the audition date drew near and I got more and more nervous, almost nervous enough to bail on the audition but I managed to drag myself there. Despite how lovely and inviting everyone was, I was ridiculously nervous. I was pacing and sweating as they led us through different games. Despite that, I was having fun and knew I was on to something. My old insecurities were riding tall though and I was sure I wouldn't be asked back... but I was wrong and here we are almost 9 years later. I am so happy I made that leap and that the Impromaniacs welcomed me in. I've worked with fantastic improvisers from around the world and made friends with so many. That spark got me interested in more and more theatre and it's my passion. I've chosen the beginning for my memory but really there are so many awesome moments, my first performance at Mocambo, the festivals and road trip to Bellingham to name a few. I hope the Impromaniacs keep going strong.
Morgan
Posted by ArgueGuy at 9:24 pm